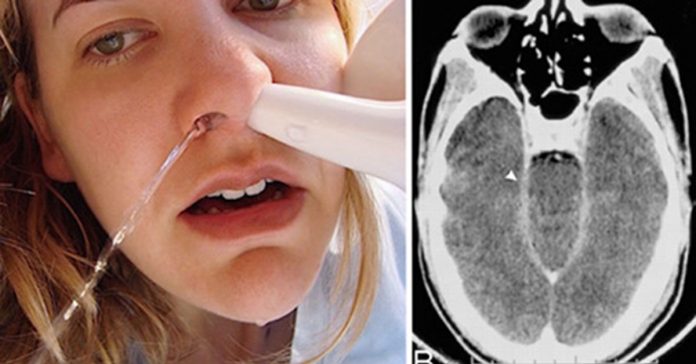 A 69-year-old woman from Seattle has been using a neti pot with tap water or non-sterile water to clear her sinuses.

A year later, she was admitted the Swedish Medical Center following a seizure. However, she succumb to a brain-eating amoeba that caused a serious brain infection.

Her case was reported in the International Journal of Infectious Diseases.

The unidentified woman apparently suffered from a sinus infection for a long time and was advised to use a neti pot to help manage her condition.

But instead of using sterile water, as is the proper way, the woman used tap water.

Doctors who attended her case believed that the water was contaminated with Balamuthia , which is a type of amoeba that can cause a rare brain infection in a matter of months.

Initially, doctors thought that the woman had a brain tumor.

Dr. Charles Cobbs told the Seattle Times there was a section in the patient’s brain that had an infection of bloody mush that was as big as a golf ball.

This mush, however, had amoeba all over it and it was eating its way into the rest of her brain.

The experts said that the amoeba seemed to have formed about a year earlier.

Her medical record showed that the woman developed red sores on her nose but the condition was misdiagnosed as rosacea, a common skin condition.

Dermatologists prescribed antibiotics to treat the red sores but it was ineffective.

The woman started developing shaking in her left arm so she underwent a CT scan that showed brain lesions.

Doctors have been trying to figure out her tumor. As they waited for the test results, however, the mass on her brain grew and developed new lesions.

It wasn’t until the surgeon opened her brain that they figured out the amoeba feasting on her brain cells.

According to CNN, the Center for Disease Control and Prevention (CDC) immediately sent anti-amoeba medications to the hospital in Seattle.

However, she fell into a coma and died a month after her brain surgery. Her situation is one of only three cases of amoeba infection in the brain in the U.S. in the last 10 years.

The CDC said cases of Balamuthia are hard to diagnose. Doctors also do not have a wealth of experience with this disease because it is so rare.

Doctors are now urging neti pot users to follow the correct way of using this tool. If you’re not familiar with this device, here’s a short explainer:

Neti pots have to be filled with a solution of sterile water, salt and baking soda.

You have to pour this solution from the pot through one nostril and out in another nostril.

You need to tilt your head and open your mouth while pouring the solution so that you can breathe easy.

Since the solution from the neti pot has to go through the nose, it’s also too close to the brain. Thus, any microbes in the liquid can be critical.