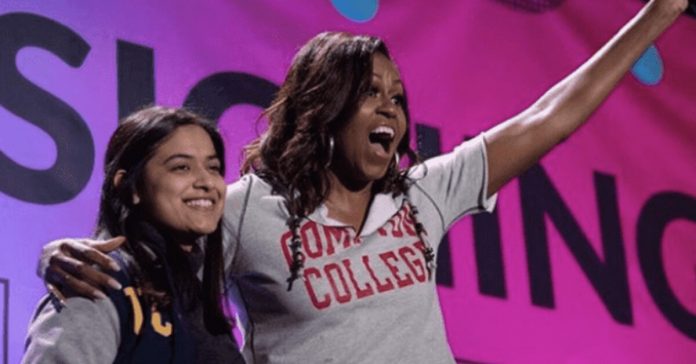 Michelle Obama, the former First Lady, has become an icon for millions of people across the entire world.

Ever since her husband, Barack Obama, was sworn into office, Michelle has done everything in her power to make the world a better place.

Now, Mrs. Obama is making an effort to help others achieve their dreams. She was invited to speak at the College Signing Day to over 9,000 students entering college.

She implored the students to aim high and follow their dreams.

According to Newsweek, Michelle stressed the importance of a great education in paving a path for achieving success.

Although this was the first time Mrs. Obama has spoken at the event, she has always stressed the importance of a good education.

She actually gave a speech on International Women’s Day that revealed her foundation’s attempt to provide better educational opportunities to women across the country.

During the speech, she pledged her dedication to continuing the effort for the rest of her life.

Michelle and Barack Obama helped to pursue this goal with the establishment of the Obama Foundation.

The former Frist Lady wants every woman in the world to have great educational opportunities and a chance to achieve their lifelong dreams.

During her first trip abroad as First Lady, Michelle gave a speech in the UK.

She stressed the importance of education and encouraged UK citizens to never take their opportunities for granted.

College Signing Day took place at the Pauley Pavilion in Westwood Village, Lose Angeles on the campus of UCLA.

During the event, Michelle Obama encouraged the audience to inspire the following generations.

She pointed out that college students represent the upcoming generation and the future of the country.

Michelle acknowledged that people in her generation are stepping aside and allowing future generations to take control.

She also mentioned that the students have to have discipline, courage, and the necessary knowledge to make good decisions as leaders.

During the address, Michelle Obama congratulated all of the students on being accepted into esteemed institutions of higher learning.

She also took the opportunity to warn the students about the rough road ahead.

Michelle reminded the audience that the future will be full of disappointments, setbacks, failures, and moments of despair.

She acknowledged that everybody fails at some point in their life and stressed that learning from these failures is the key to success.

I am so proud of each and every student out there who’s celebrating #CollegeSigningDay and committing to continue their education. I know how hard you worked in all of your classes. I know how much time and care you put into your applications. And I know how many hurdles each of you had to clear to make it to today. So I hope you all are as excited about this day as I am—but I’m even more excited to see what you all do in the years ahead. #BetterMakeRoom

To add some clarity to these points, Michelle shared some of her personal experiences with failure and success.

Mrs. Obama revealed that many people told her to give up on her own ambitions in the past. Somebody told the former First Lady not to aim her goals too high.

They even had the audacity to tell Michelle that she was asking too much from life. This advice to dream smaller didn’t sit well with the ambitious woman.

She told the audience that everyone must decide to listen to their own story or the haters.

If you found this article inspiring, show it to a family member or friend who is attending college soon.

ABOUT US
It’s not about following websites and social media platforms, it’s about sharing these stories so more and more people read them. That’s when we realized that we weren’t doing anything extraordinary, you were. This website is for you, made by you because you are our hero. You make us and together we spread stories that really matter.
FOLLOW US
© 2019 Relay Hero | Superlative Pte Ltd
748shares