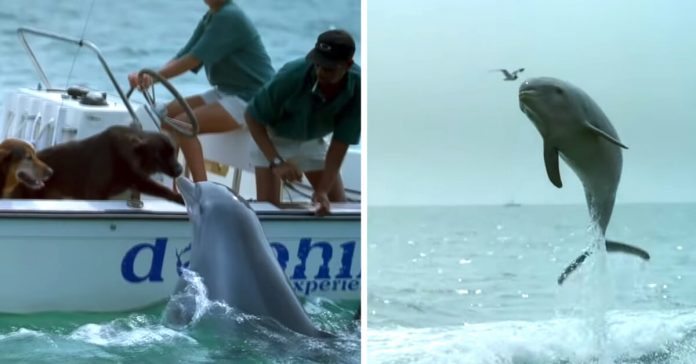 If you have a dog, then you know how loving the animal can be no matter what you do, such as giving it a boop.

“Dolphins” is a classic movie shown in IMAX theaters that shows the lives of dolphins and what they do when they are in their natural habitats.

A dog is in a boat with his owner when a dolphin jumps out of the water to give him a boop on the nose.

Even though the animals are very different, it appears as though the dog enjoys getting this delightful surprise from the dolphin.

He doesn’t try to pull away from the dolphin, letting him gently give him the boop.

There’s another dog on the boat looking at the water as if to say that he wants one as well.

Even the people on the boat aren’t too surprised about what happened.

After the dolphin greets the dog, it does a happy dance in the water. His fins and his tail flap up and down until he swims away from the boat.

The dog then barks his goodbye to his new friend who lives in the ocean.