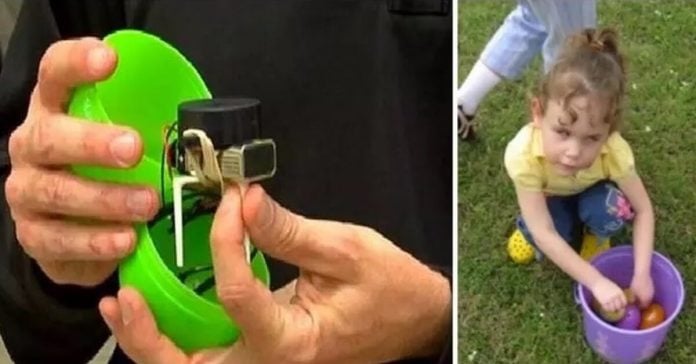 Imagine the heartbreak of finding out your four-month-old baby is going blind. For David Haisch, that nightmare became a reality a few years ago for his daughter, Rachel.

He thought that her life was surely over, and that she would always be dependent on other people to help her survive.

But, Rachel has taught him differently. Even as a young toddler, she began to show signs of independence, wanting to do things by herself without any help from others.

David watched as his daughter grew and became more and more confident in her abilities.

Recently, David was helping his church organize their annual Easter egg hunt when he first thought about making beeping Easter eggs for blind children so they would be able to participate in the fun.

He did a little research, and found someone who was already making beeping eggs.

David, who works as an ATF agent, already had some knowledge about how explosives work.

So, he took the beeping eggs that he found, made some modifications, and created a beeping egg that would work for blind children.

Activated by an exterior switch, the eggs will emit a beeping sound, allowing visually impaired children to find them.

At a bomb convention, his beeping eggs caught the attention of the IABTI, International Association of Bomb Technicians and Investigators, and the Rachel Project was born.

It’s an initiative where military and law enforcement officials get together to build the eggs, donating not only their time, but their expertise as well.

The beeping eggs are then donated to schools, churches, and other organizations for children who might not otherwise be able to participate in the egg hunts.

The eggs have really caught on, and are being used in other capacities as well.

It’s simply amazing what a father’s initiative can create when he is trying to help his child.

If you would like to help with funding or maybe even with putting the eggs together, please contact the IABTI or the NAPVI, National Association of Parents of the Visually Impaired.