There is a market located in the Bayrampasa region of Istanbul, Turkey, where a stray cat has taken up residence.

That’s not unusual, but the fact that this feline now serves as a guard at the front door is.

The cat has been seen hissing and striking out at any men or dogs who might try to enter, but calmly allows children and females to pass without any problem.

Cameras have managed to record this cat’s strange behavior outside the market. Area residents who feed the cat report that normally she is calm and friendly.

It’s only been recently that she turns into a ferocious animal when any men or dogs approach, throwing herself at them to prevent them from invading her space.

Most cats act antagonistic toward dogs, but it is very unusual for them to dislike all men.

Many males have experienced her sharp claws digging into their legs as they try to pass her to gain entry into the market.

On camera, there is one surprise attack after another recorded against men, who try to brush the cat away and then run hurriedly away. 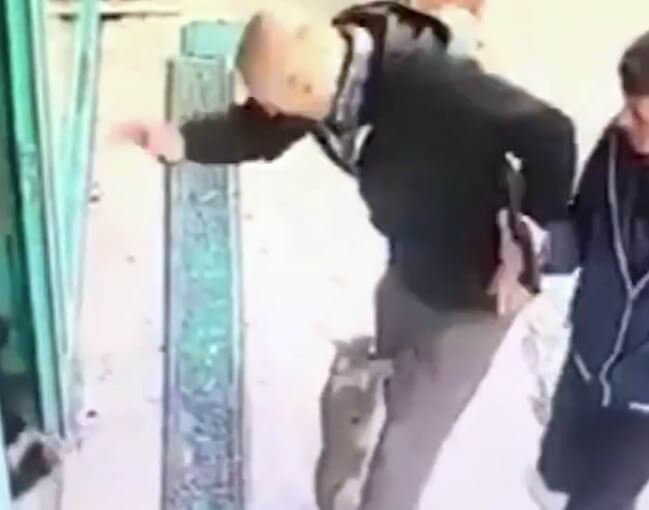 In contrast, when a woman passes by the cat, she doesn’t move a muscle.

But when two men are seen immediately following behind the same woman, the cat is seen freaking out and jumping onto their legs.

When dogs approach the market entrance, the cat is also hostile, jumping onto their backs as their owners try to protect them.

People who care for the cat made an appointment with a local veterinarian in order to better understand her split personality and aggressive actions against both men and dogs.

Ali Aydin, who lives next to the market, offered the best explanation for the cat’s strange behavior.

He said she had recently delivered several kittens and most likely perceived the approach of men as well as dogs as threats to her tiny babies.

For some reason, the cat feels that she can trust women and children to not harm her kittens, but doesn’t extend that same trusting feeling to dogs or men.

ABOUT US
It’s not about following websites and social media platforms, it’s about sharing these stories so more and more people read them. That’s when we realized that we weren’t doing anything extraordinary, you were. This website is for you, made by you because you are our hero. You make us and together we spread stories that really matter.
FOLLOW US
© 2019 Relay Hero | Superlative Pte Ltd
101shares