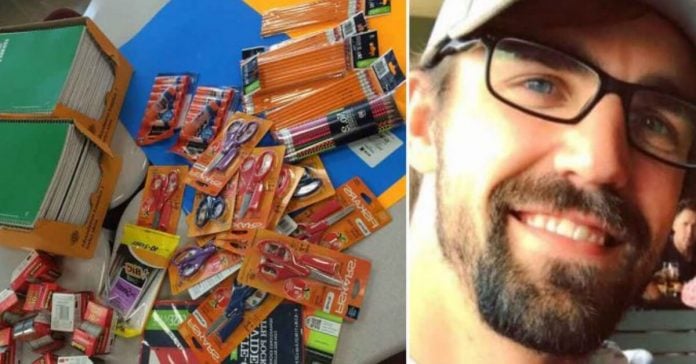 It is no secret that educating your children isn’t cheap – even if your child goes to a public school, a fair amount of money still goes into buying stationery and school supplies, to ensure your children are fully equipped for whatever they are to do in class.

Except even this most basic expectation every school year seems to be bemoaned by parents who are more than capable of affording it.

Iowan school teacher, Leland Michael, was preparing for his class’s inevitable need for stationery by shopping at his local Walmart’s school section.

It is understandable that not everyone can afford school supplies.

And with the school already on a shrinking budget, it is often up to teachers like Michael to pay for these school supplies out of their own pocket.

Considering just how much time, money, and effort educators like Michael are doing for their children, you would think that parents would at least be thankful and show some appreciation.

Alas, that doesn’t seem to be the case. As Michael headed off to the register with a shopping cart full of school supplies, he was stopped by no less than two different couples browsing the school supplies aisle.

As it turns out, they were all parents who wanted to complain about how teachers these days were so greedy, and how they had to tick off a long list of items they had to get for their kids.

Were they expecting that the school provide their children with these supplies? Did they not see how his cart was full with a class set of school supplies?

With all the recent publicity about just how much money teachers are spending out of their own pocket for their classes and the items in his cart, you would have thought the parents complaining to him would have put two and two together and realize what he was doing. Luckily, Michael’s faith in humanity was restored when he reached the cash register.

While waiting for his turn in the checkout lane, Michael noticed a man and his daughter buying some school supplies, presumably for the start of the school year.

It seemed that the man had recognized Michael as a teacher while standing in line.

Before he left, he turned to Michael and thanked him for all he does for his students, and mentioned that he wanted to help out as much as he could.

To Michael’s pleasant surprise, the man then gave him a Wal-Mart gift card, shook his hand, and left with his daughter, who had a wide smile on her face. In it, he remarked that while he was touched by the man’s generosity, he was more reassured by how this man was imparting an important lesson to his daughter.

Namely, that school was important, and that its teachers should be respected.

Hopefully, more parents will teach their children such a lesson as well!